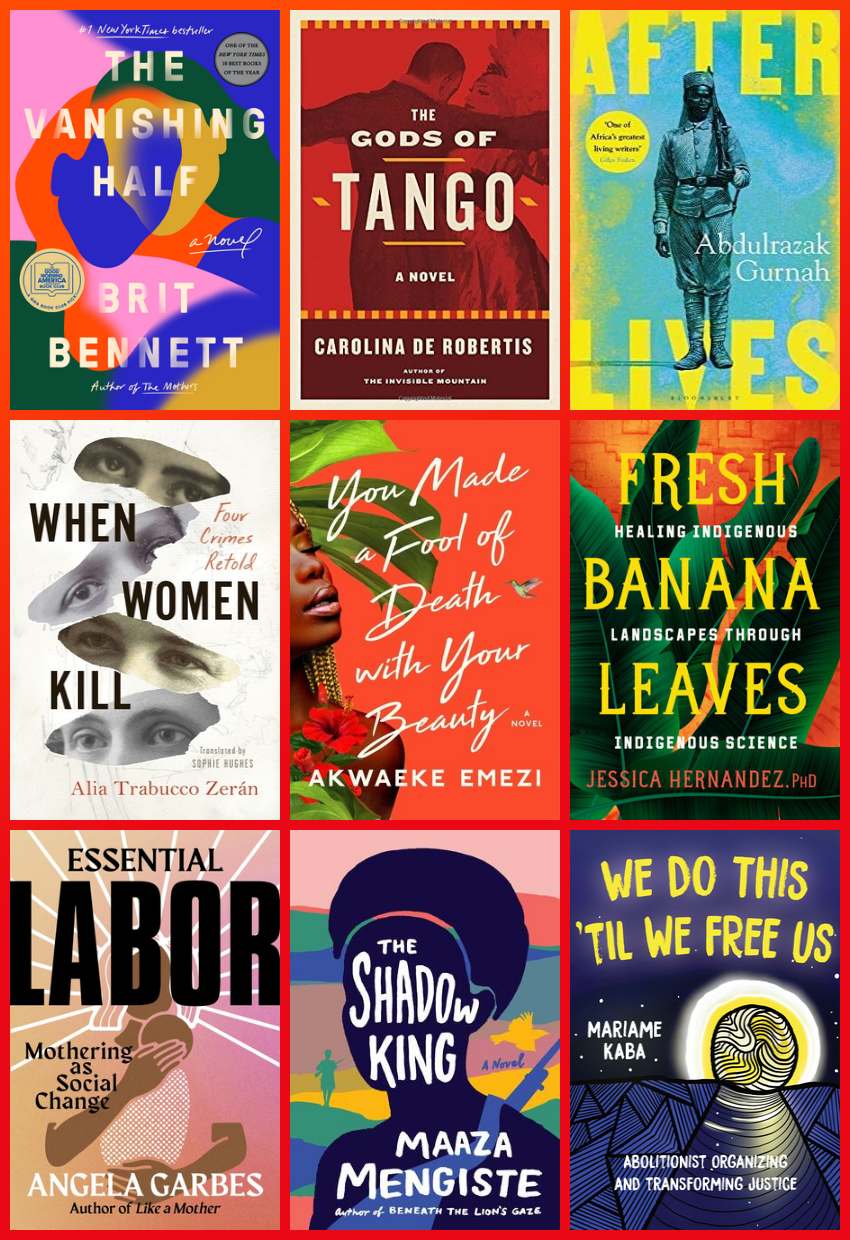 I can’t quite believe it’s this time of year again – the annual book blog post! Books - choosing them, thinking about what to read, and actually reading – took up a tiny portion of my brain this year. I’m astonished to find that I read more than 10 books, in all honesty. I didn’t track them, didn’t think about what I was reading, barely added books to my to-read list, and went to a bookshop more rarely than I have before.

Now that I’ve retroactively added the books I read to Storygraph (I’ve been totally off Goodreads for a copule of years now, and am still on the look out for people I know to follow on there - let me know!) - the only guiding principle seems to have been the Literature Festival in Berlin. I read 6 books by Bernardine Evaristo, who I had the absolute pleasure of chatting with (short write up in the Exberliner here), and two by Maaza Mengiste, who I also interviewed there. Interviewing authors whose books I read remains truly one of my all-time favourite things to do, and I’d love in the future to figure out how to do this more often.

In total, I read 37 books this year, according to Storygraph. Amazingly given I paid no attention to what I was reading and didn’t track it at the time, 28% were nonfiction and 72% fiction, which is one percentage point different to 2021! 32 were by women or non-binary authors; 35 of the 36 were by authors of colour, by my own guessing (all identity mistakes my own!); just 3 were translations.

Last year, Carolina de Robertis’ book Cantoras was one of my top three books – this year, I decided to try some of her others, and I wasn’t disappointed. The Gods of Tango was such an ambitious book but one that fully took me with it on the journey. I now think of de Robertis as one of my favourite authors!

Similarly, going back to another of my favourite authors, I read two more books by Akwaeke Emezi (You Made a Fool of Death With Your Beauty, and Bitter) and loved them. I can’t tell you how much. I’m astonished at their level of output (I think it’s been a book a year, at least, for the past few), and how exquisitely unique their writing is. I’m envious of anyone who hasn’t read their books yet, because you have the joy of picking them up for the first time yet to come! Start with You Made a Fool of Death.

And finally, though I know I’m late to this party, The Vanishing Half by Brit Bennett fully deserved all the praise and awards that it got. It was almost, but not quite, an hard-to-believe premise told in an extremely believeable way, with vivid characters and full of empathy.

Afterlives, by Abdulrazak Gurnah was one of very few books I’ve read that focuses on German colonialism. It wasn’t an easy read in a few senses, but mostly in that it was a complex tale which needed concentration to follow and keep up with. That said, it was incredibly worth it. Gurnah won the Nobel Prize for Literature in 2021, and has a huge body of work examining the effects of colonialism, which I’m looking forward to diving into more in the coming years.

When Women Kill: Four Crimes Retold, by Alia Trabucco Zerán with Sophie Hughes (Translator) arrived in my postbox thanks to a subscription I have with And Other Stories, an indie publisher based in the UK who publishes contemporary writing from around the world. Somewhat unsurprisingly, the title caught my attention, and the book itself was so fantastic. The author, Alia Trabucco Zerán, reexamines four cases of Chilean women who committed homicide, going back to look at the events themselves, the media furore around it, the causes and the patriarchal structures that created those conditions. It’s almost like a book version of a true crime podcast, and I thoroughly enjoyed it.

Fresh Banana Leaves: Healing Indigenous Landscapes through Indigenous Science by Dr. Jessica Hernandez was like nothing I’ve read before. Dr. Hernandez is an Indigenous environmental scientist who combines her Indigenous knowledges with environmental scientist, and does so in the way that the story is actually told. The book crosses genres and styles in a way that feels so much more true to the topic of the environment, bringing it back to nature and living things, knowledge that was passed down through generations, and knowledge that doesn’t typically get valued or included in Western understandings of science. If you enjoyed Braiding Sweetgrass, you’ll also enjoy this one.

Essential Labor: Mothering as Social Change, by Angela Garbes, is a book that I’ve now recommended a lot of times! I offer the recommendation with the big disclaimer that it is very US-centric – some of the political structural problems and issues brought up are, at least in the form they’re described there, not so relevant for many other parts of the world. But I really enjoyed the premise and learned a lot from the analysis, and despite the geographic specificities found myself nodding along to large parts of the book. I would love to read a similar analysis rooted in other parts of the world, too. But the general premise: that “the act of mothering offers the radical potential to create a more equitable society”, and that mothering is highly skilled work that is deeply undervalued, remains true all over the world, and it made me rethink my own role as a mother. It also opens up the possibilities of mothering being done by more than just the formal ‘mother’ in a family, but aunties, uncles, relatives, friends.

The Shadow King by Maaza Mengiste was at times brutal, but I couldn’t peel myself away from the pages. It was such a joy to talk to Maaza about the book (the video recording is here if you’re interested!) because there was so much in there to delve into. Of particular interest for me was the fact that the book considers the brutal war (it’s set during Mussolini’s 1935 invasion of Ethiopia) from various perspectives, including from that of Italian soldiers and an Italian photographer, which must have taken an incredible amount of empathy to do. The book also focuses on the role of women during the war, a deeply overlooked role in the historical record.

We Do This ‘til We Free Us: Abolitionist Organizing and Transforming Justice, by Mariame Kaba with Naomi Murakawa (Contributor) and Tamara K. Nopper - gave me so much food for thought. It’s a combination of original essays, reprints, and interviews, all examining abolition and transformative political struggle. I’m so appreciative of Mariame Kaba’s work and approach, and have enjoyed listening to her speak on podcasts like Finding Our Way. Her commitment and practice of hope and generosity, while being at the frontlines of hard struggles, is incredibly inspiring.

Books that almost made it to the Top 9 grid but didn’t quite: