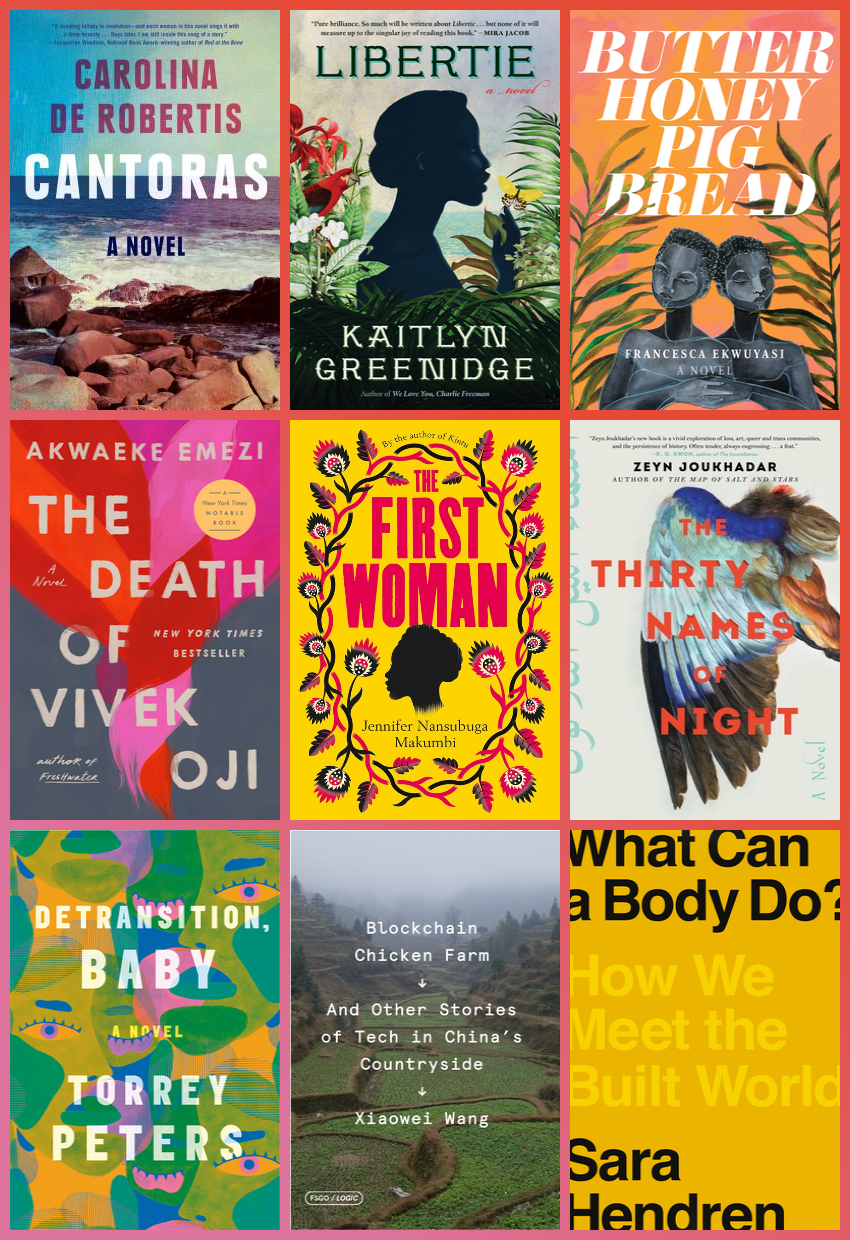 Reading in 2021 was shaped by two major things for me: first, it was my first full year as a parent, and second, of course, the pandemic and all of those associated impacts. As a consequence of both or some combination of those, I entirely lost the desire to read for the first few months of the year, lost in a fog of sleepless nights and exhaustion – terrifying, now I look back on it! And in the second half of the year, when I did want to pick up a book, I didn’t have the time I usually do to research or even think much about what I was reading.

Instead, I read whatever was at my fingertips. Recommendations from friends, whatever was laying out on the tables at my new and fantastic local bookshop, She Said, or recommendations generated via Storygraph. So unlike previous years, I didn’t have an intentional theme to guide my reading - though looking over the list of books I read, it seems that many of them were stories of womanhood, exploring relationships between women in different forms. I wonder if this was at some level, subconsciously, intentional, as personally, this year (as many of us were) I was forced to be much more intentional about maintaining relationships, many with women.

This year, I read 32 books in total. I moved off Goodreads at the start of the year, to Storygraph, and became a Plus subscriber too - which means that this year I get all sorts of new statistics about my reading this year - like that 73% of the books I read were fiction, and 27% nonfiction, and 7 books were in the LGBTQIA+ genre. By my own estimations, 22 were by people of colour, 27 were by women and non-binary authors, and just two were translations. I really appreciate having a non-Amazon owned way of finding books and tracking reading, though I do currently miss the community aspect of Goodreads. (If you’re on Storygraph, let me know! I want to follow you!)

Three books swept me off my feet this year. The first, Cantoras by Carolina De Robertis, was wholly unexpected – it was a recommendation via Storygraph, and I hadn’t heard of the author before. It’s historical fiction, set mainly during the Uruguayan dictatorship, about five queer women and their love, relationships, friendships and resistance. I devoured it! I loved it. It was beautiful and heartbreaking at times, but ultimately hopeful. Unlike some books set in similar times of oppression, not too much time was spent describing torture or pain in graphic ways (which I often find hard to get through) - instead, the resistance, the effort put into creating new spaces where the women could be themselves, the creation and the joy, was also very present.

The second was Detransition, Baby, by Torrey Peters. The quote on the front of my copy, by Carmen Maria Machado – “Detransition, Baby is so good I want to scream” – sums up entirely how I feel about it. I’m as yet physically incapable of telling anyone about the book without letting out some kind of small scream of delight. It’s so good, so smart, so incredibly nuanced and thoughtful and fearless, about womanhood and sex and relationships. It’s one of those books that I almost wish I hadn’t yet read, so that I would have the joy of reading it for the first time, and I can’t recommend it enough.

The third was The Death of Vivek Oji, by Akwaeke Emezi. I had the pleasure of moderating a panel with Emezi at a side event to the International Literature Festival in Berlin in 2018, where we talked about their debut novel, Freshwater, so I was excited to read this and it did not disappoint. The characters felt so, so vivid, like I could touch them and like I know them, and the story itself was so gripping and full of unexpected twists, I felt like I wasn’t breathing at points because I was concentrating so much on the words on the page.

Sara Hendren’s What Can A Body Do? How We Meet The Built World, was just the kind of tech/society/design non-fiction book that I love reading. I’ve loved Sara’s writing that she’s shared on her blog for a few years now, and I’m sad she’s not on Twitter anymore. I learned a lot from her book, and the writing was gorgeous, the stories engrossing, and the key messages of the book spun within a narrative arc that felt elegant and fascinating all at once.

Butter Honey Pig Bread, by Francesca Ekwuyasi was another book that took me by surprise, because I picked it up without knowing much about it - it tells the tale of three Nigerian women, a mother and her twin daughters, across spiritual and human worlds, different places and spaces, queer love and the mother-daughter bond, too. It was gripping and unexpected.

The First Woman, by Jennifer Nansubuga Makumbi, was one of the best coming-of-age novels that I’ve ever read - an engrossing combination of Ugandan folklore and modern approaches, all through a feminist lens, wonderfully unpredictable.

Libertie by Kaitlyn Greenidge, another historical fiction novel, inspired by the true story of the first Black woman doctor in New York. I love Kaitlyn Greenidge’s writing - her first novel, We Love You, Charlie Freeman, was fantastic, and this was incredibly different but just as wonderful.

Blockchain Chicken Farm: And Other Stories of Tech in China’s Countryside, by Xiaowei Wang. I was so excited to see this come out - I’ve followed Xiaowei’s work for years, and so appreciate how their perspective on technology, society, and China is so different to the mainstream out there. They’re a trusted storyteller, a critical eye and a reflective writer, all making for a fantastic read for anyone wanting to learn more about the politics of technology in rural China.

The Thirty Names of Night, by Zeyn Joukhadar, was an emotional, gorgeous exploration of identity, following three generations of Syrian Americans, narrated by a trans boy who explores his own place in the world through the story, too. It was beautifully written.

I finally got round to reading a couple of extremely highly acclaimed books that I had put off before: Normal People, by Sally Rooney, and Girl, Woman, Other, by Bernadine Evaristo. I had high expectations for Girl, Woman, Other and the book surpassed them. The ways in which the lives of the 12 central characters came to life, intertwining with each other in different ways, was so smart and so real - I’ve gifted it a couple of times already.

I picked up two books this year that were about Black masculinity in the UK, in different ways – JJ Bola’s The Selfless Act of Breathing, and Open Water, by Caleb Azumani Nelson. Both books reminded me of the Toni Morrison quote - “The function, the very serious function of racism is distraction” – in that they delved into how anti-Black racism affected all areas of the narrator’s life, not just the encounters with the police or the incidents of explicit racism, but in assessing one’s self-worth and desire to live, shaping hopes and dreams and possibilities. Both left me with much to think about, and I would really recommend them.

Susanna Clarke’s Piranesi was wonderfully weird and engrossing. I started reading it without having a clue what it was about, and I’m glad I didn’t because I can’t imagine any description that would quite do it justice. The Song of Achilles, by Madeline Miller, was also wonderful. I really enjoyed Circe, her second novel, and this one didn’t disappoint.

The Island of Missing Trees, by Elif Shafak, was also a painful-at-times but really wonderful read. I love Elif Shafak’s writing, and I’m astonished at the breadth of topics she includes in her storytelling with such intricacy and detail.

Most of the non-fiction books I read were for work - either as background research for this zine I wrote about the political and social consequences of the rise in DNA testing, or as research for this paper I wrote on the ethical implications of predictive machine learning for children.