Chaos Communication Camp: on belonging, and fighting together

Last week saw almost 5000 people converge on an old brick making factory just outside of Berlin, for the Chaos Communication Camp. It takes place only every four years - so it was a big deal for the hacker community.

It was a hacker camp, and I’m not a hacker. I work and spend time with hackers, activists, technologists, civil society groups, researchers who study technology and society - lots of people who are on the peripheries of hackerdom, but I’m not a hacker, and initially, this worried me slightly. I wondered whether I would feel out of place, and even though I had a talk accepted to speak at the camp, I wondered whether people there would be interested in what I had to say.

being on the periphery - and belonging

But there were two things that made me feel a lot more at home: firstly, the opening session, where we were encouraged to embrace our confusion, told to ask questions, and welcomed no matter what background we were from- Fiona and Hukl did a fantastic job. 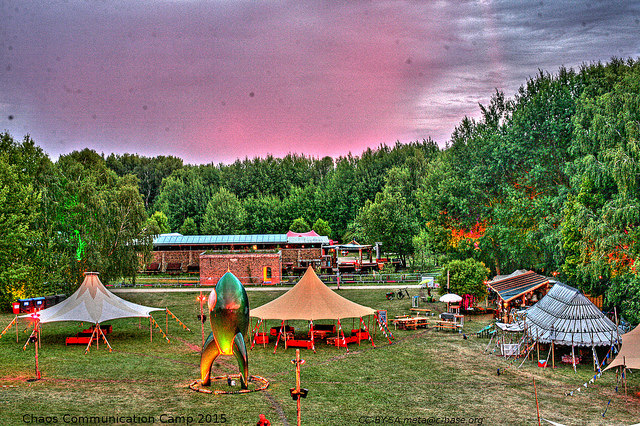 Secondly: the self-organised session on academics and researchers who study hackers. A lot of people turned up, and a quick show of hands showed that, like me, the majority of them weren’t hackers. The discussions that we had - about hackers and hacking in postcolonial societies, about representation and the ethics around studying and learning from different groups, also made me realise a kind of obvious but basic thing.

For hackers, and hacker culture, to actually have positive effects on our society (or societies), it needs people on the peripheries from a range of perspectives to be researching, learning, and thinking critically about the way that new technologies can and are affecting our lives.

And that’s why I had wanted to come to the camp - to learn from other technology critics, writers, researchers and activists, and to have in-depth debates about things that I care deeply about. Like, for example, the role of technology in perpetuating or mitigating unfair power structures, the way that we understand the history of certain technologies and how it affects their use today, the varying ways that technologies designed in one society can have huge unintended consequences in other cultures, and much more.

It might sound obvious, I don’t know. But realising that there is an actual place (and, if I dare say so myself - a pretty important place) for people like me, who don’t possess magical technical powers, really changed the way I was thinking and feeling about being there.

The other realisation I had during the camp was about the scale and importance of the work we do. Beyond our desire to hang out with friends or play with robots, there’s a deeper political reason that many of us were there. You only have to look at those who have lost their lives, or sacrificed their freedom to understand how vitally important this work really is.

There are people who should have been at camp, who would have been welcomed as the brave, courageous people that they are, who are in jail, or being denied their basic rights, right now. They used their skills for good and to stand up for what they believe in, and if nothing else, it’s our duty to make sure that their sacrifices weren’t in vain.

Many of the people I had the honour of listening to and talking with at camp are also putting a lot on the line for similar causes. I, and many others, were stunned into total silence when hearing from Kate Wilson, who told us about how she was spied upon by Mark Kennedy, a British police officer who went undercover to infiltrate the climate change movement in the UK, and lived as her partner for two years. She’s fighting to bring him, and the UK Metropolitan police, to justice and if you haven’t already, I would really recommend watching her talk - as I said at the time, I’m in awe of her courage in standing up to such deeply rooted, institutional injustice.

There were other inspiring talks, and many others who attended and who are really on the frontline of this kind of activism. It was humbling to be among such bravery.

As a community, we have some truly gargantuan opponents to fight right now, and combining our differences and our diverse perspectives and skills make us that much stronger. If there’s anything that last week made me realise, it’s that we really need to embrace those differences and join forces if we’re to win.