Facebook controls our Newsfeed- what we see, what we don’t, and we have little idea how it works. But we don’t necessarily need to know exactly how it works, in order to use it to our advantage. It turns out that a couple of individuals have already “hacked the algorithm” by using certain keywords in their Facebook status, to give visibility to issues they care most about - so maybe it’s time for activists to join the game.

This great piece by Zeynep Tufekci explains some of the intricacies around how “the newsfeed rules your clicks”, and there are many more analyses to delve into.

While we, regular users, cannot pretend to understand how exactly the Newsfeed algorithm works - not only due to the fact that it changes regularly, but also down to the complexity of it to start with- there are a few things that we can observe, and we can use that to our advantage. As the article above proves, being at the top of the Newsfeed makes a huge difference to the number of clicks an article might get, and for activists who need to spread news about important issues, this could make all the difference.

So rather than waiting for Facebook to provide us with more options, or to be more transparent about how the Newsfeed algorithm works, let’s see what we can discern ourselves, and use that to get what we want out of Facebook - ie. more visibility for important issues.

Getting to the top of the newsfeed

On my Newsfeed at least, happy news travels far. Weddings, engagements, new babies, new jobs. PJ Vogt, one of the people behind the podcast Reply All, noticed this too - and to tell his friends of his new podcast, posted this: 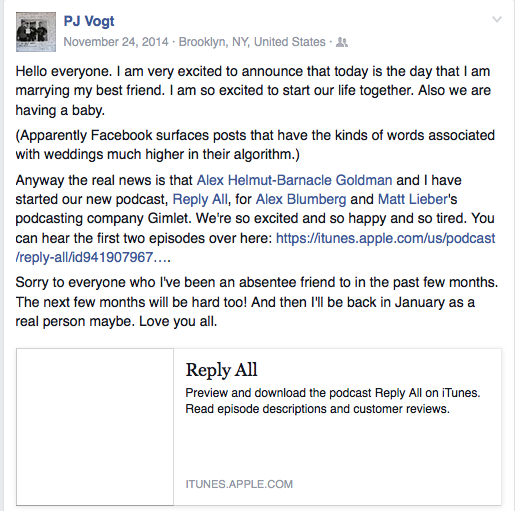 The first part of his status reads:

"Hello everyone. I'm very excited to announce that today is the day that I am marrying my best friend. I am so excited to start our life together. Also we are having a baby."

His hack of the Facebook algorithm caught the eye of our mutual friend Kate, who told me about it. It got 223 likes, and the comments revealed that it resurfaced to the top of the newsfeed the morning after posting. Some of the commentors even went along with the joke, using the word ‘wedding’, or asking when the baby was due, in the comments.

And it turns out PJ was inspired by Margarita Noriega, who used the same technique - talking about weddings, babies and a new job all in the same status - to get her status to the top of Newsfeed for 4 consecutive days.

So Margarita used the technique out of curiousity, and PJ used it to promote his podcast - but what if we used this technique to increase visibility of protests, raising awareness of important but underreported issues, or activist movements?

Of course, this is somewhat of a cat and mouse game. It’s incredibly easy for Facebook to change its algorithm, and the information playing field here is very unequal. Who knows how many times you can “announce your engagement” on Facebook without it becoming obvious that it’s not a real engagement - but in the meantime, why not give it a go?

We talk increasingly about the problems that come with increased use of algorithms by corporations to control their users, and the huge power that those corporations hold - maybe it’s time to take some of that power back, and play them at their own game.