Telling the story of the Syrian conflict; digital storytelling methods

The Syrian conflict is one of the worst tragedies of our time, and now, unlike during many tragedies of years gone by, now we have new ways of telling those stories in real time, reaching people who might be geographically far away, but who could (perhaps with the right story) be brought ever closer. Over the past couple of years, organisations, institutions and individuals have used various digital strategies to tell Syria’s story.

As Susan Sontag said, images transfix, and anaesthetize. I wonder though; could digital storytelling methods cause a similar ‘fatigue’? Though some of the examples here are now fairly new and innovative strategies, will they at a point become so regular that they don’t evoke any emotions within the viewer at all?

Here are a few examples I’ve come across of interesting campaigns and stories around the Syrian conflict, all of which evoked strong emotions for me.

Hashtag campaigns are, these days, nothing new - but over the years, there have been various used on this theme. One of the most heartwrenching for me was the hashtag #whenIgobacktoSyria, started by Leila Nachawati, a Spanish-Syrian blogger now living outside of the country. It showed another side to the conflict that we rarely see through- not one of destruction and tragedy, but one of regular, everyday life, and the happiness that could be drawn from it.

Nice! RT @SyrianBeliever I'll sit next to my grandma and listen to her sing old Syrian songs, which Lena Chamamyan sings #whenIgobacktoSyria

#whenigobacktoSyria I'm going to stand in the middle of Souq al 7amadiyeh and soak it all in. Probably with tears running down my cheeks. 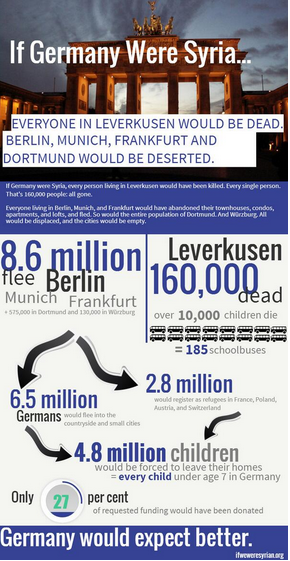 The campaign site, If We Were Syrian, compares the casualties experienced in Syria to a place more familiar to the viewer. An infographic (such as the one here) is generated for the viewer, based upon the choice of one of eight developed countries, localising the level of destruction to a country where this kind of conflict is, happily, unknown in the modern day.

This Washington Post piece contains 18 personal stories of Syrian refugees. Each story has videos of the individual concerned, and their family; and perhaps more touching, are the short statements that appear on the site, like this:

The New York Times produced The Refugees in 2013, with 360° photographs taken in the new homes of three Syrian refugees, along with short descriptions of their personal stories. Unlike many of the examples here, this story focuses on life after people have left Syria, and the hardships they face as refugees.

Eyewitness coverage, and before and after images

The Wall Street Journal worked with Storyful to produce this two part piece, Syria Shattered. The piece includes video, audio, and eyewitness coverage. Somehow, one of the parts that got me most was seeing the ‘before and after’ images of the market, which makes it gut-wrenchingly simple to understand the mindless destruction that has gone on.

Syria Deeply is a great source of information on the conflict; but I can never visit the homepage without failing to notice the counter in the top right hand corner, counting how many days the conflict has dragged on for. At the time of writing, it’s on Day 1489.

Syria Untold’s coverage of the Meals Under Siege Facebook page, which share recipes that people living in Syria have created, takes a closer look at the practicalities of living in Syria during the conflict. It highlights the creativity and resilience of Syrian people, and day-to-day struggles that they face - like much on the site, an untold narrative that it’s all too easy to forget.

Set up by UNICEF, Children of Syria contains various materials charting the effects of the conflict on the lives of children, including videos, and personal stories. Unfortunately, though, their use of data driven storytelling is fairly low, with just a few headline figures, but nothing more than that. I feel like the stories here could have been strengthened much more with effective and accurate use of data and information visualisations.

Virtual reality: evoking the feeling of actually being in Syria

Project Syria is an immersive journalism project, which uses actual footage and audio from Syria, to take empathy to a whole new level. It was commissioned by the World Economic Forum, and created by Nonny de la Pena. From the project description:

Through real time graphics from the Unity game engine and the sense of presence evoked through high-resolution virtual reality goggles and compelling audio, Project Syria takes the audience to the real events as they transpire.

Of all of the sites and pages linked here, just one - the UNICEF Children of Syria site - contains a link for the viewer to donate money to support those in Syria, and even there, 4 clicks are needed to actually get to the ‘donate’ page.

Many of the sites linked here seem to aim at evoking emotion among the viewer, whether that be empathy, horror, or sadness. Efforts at telling the story are powerful and valuable; but are they enough?

Given the terrible situation the country is currently in, storytelling seems to fall sadly short. Not providing an option for the viewer’s resulting emotion to be converted into actual action that would benefit the country and its people, is a missed opportunity.

This could take a variety of forms; some sort of “easy ask” appearing on the site, with a direct “donate” button, or a link on all such stories to a list of organisations working in various support capacities, for example. I value storytelling hugely, but, especially in this tragic case, action seems much more valuable.