On booksprints, responsible data in development, and diversity 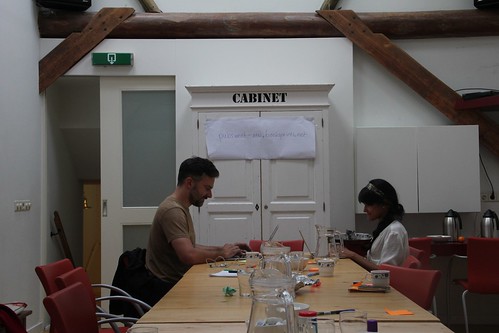 Last week, I took part in a 'booksprint', which involved bringing together a group of people from different disciplines, to collaboratively write a book from start to finish in just three days.

It was my second booksprint - the first being this, "How to Read and Understand an Oil Contract", which I coordinated logistics for, and participated in as target reader - but my first as a fully-fledged writer. It was a brilliant experience, for a number of reasons - some obvious, some less so.

Firstly: I had the chance to sit down with an incredible group of people, and not just interact with them in passing as one does at a conference, or listen to them speaking, but really intensively work with them. It’s a fairly intense environment, as decisions have to be made in the group, everyone takes part, and obviously, there are (if the participants are chosen correctly!) a range of different experiences and opinions within the group. It was pretty impressive how quickly we went from the formalities of having just met, to working together as if we’d done it for years, complete with light-hearted teasing and joking around.

Having the opportunity to really dedicate time to thinking about responsible data in development, which is a topic that I’ve been reading and thinking about for a while now, was also really valuable. We were taken to a small farmhouse somewhere outside of Amsterdam, with only sheep and fields for company: this meant that we were almost forced to be super focused on the topic in hand. Additionally, the presence of a facilitator, and the fact that we had been asked to dedicate three full days to this, meant that we couldn’t be distracted by emails, or outside world pressures. It was pretty exhausting, but also very productive, to have this time carved out especially.

Hearing from people who had very different experiences to me on this topic was also very interesting: for example, people who had worked in international development for a long time, or those who were coming from the perspective of focusing primarily on digital security. I hope that this range of perspectives brought a richness to the book that would not have otherwise come across! It also, naturally, led to different aspects being prioritised within the book itself.

It was fascinating to be involved in the booksprint process, too, which for me was heavily shaped by the facilitator, Barbara. The best way I can think of to describe the role of a booksprint facilitator is to compare it to that of a puppetmaster. She pulls the strings, and moves us around - but, interesingly, in such a way that we barely even noticed. Of course, there were some obvious actions that she did, like asking us to meet at a certain time. But more nuanced was the organising of certain people to work together, or specific groups to work on specific topics, or people to take on certain roles, the role of reassurance, bringing the group together to make decisions in a timely way, and keeping the group dynamic healthy and productive.

In broad ways, the broad qualities demanded of a booksprint facilitator are very similar to those needed by a good event, unconference or conference-facilitator - just, a bit more specific and tailored to the fact that at the end of the appointed time, the very concrete output of an actual book is required.

Lastly - but for me, most importantly, was the diversity of the group in hand. I can’t emphasise enough how important this was to me, and how much of a difference it made; admittedly, none of which I would have guessed beforehand. Let me explain: it was the first workshop/event that I’ve attended in Europe, where white men were in the minority, and women of colour were (almost!) in the majority.

This fact might not mean very much to you if you generally find yourslef in the majority (or, if you’ve never even thought about that, because you take it so completely for granted) - but for me, it changed everything. The saddest part of being in a minority, sometimes, is realising that even your expectation of being included, or that you’ll 100% understand everything mentioned, or feel 100% relevant to the conversations held, has somehow been lost among the way. And the best way to realise that this has happened (at least for me!) is to spend some time in an environment where the jokes are about things that only people with your cultural or social background would understand.

For example: references to life in a South Asian immigrant family. References to being a (female) immigrant in an English-speaking country. Stories of South Asian culture, or cultures where big, chaotic families are the norm, or where expectations of girls and boys and women and men are very, very different.

All of those things happen to me so rarely - I can probably count the number of people with whom I feel like that on one hand - that it was totally wild for me to have that intensely for so many days. As usual, the discussions we had were focused around the perspectives of the majority of the group - but unusually here, that experience was women, not white men. All too often within international development, we hear and see men from rich countries talking about the poor, about poverty, about their experiences in impoverished countries… and, frankly, it’s really not that useful.

In terms of the book itself, it’s clear that because of that rich diversity of authors, and the collaborative method in which we wrote the book, we tackled the issues in hand in a different way to the way in which, say, a group of middle aged white men would have done. Even better was the fact that the organisers hadn’t set out to make this the case - but rather, it simply happened when they were thinking of people who would be appropriate to attend the sprint.

Comments and criticisms on the book are really welcomed - you can download it here, http://tiny.cc/rddevbook - and the engine room are currently thinking about the best way to put it online in a way that will encourage feedback. Any suggestions, drop them a line!