The human cost of "hartals" 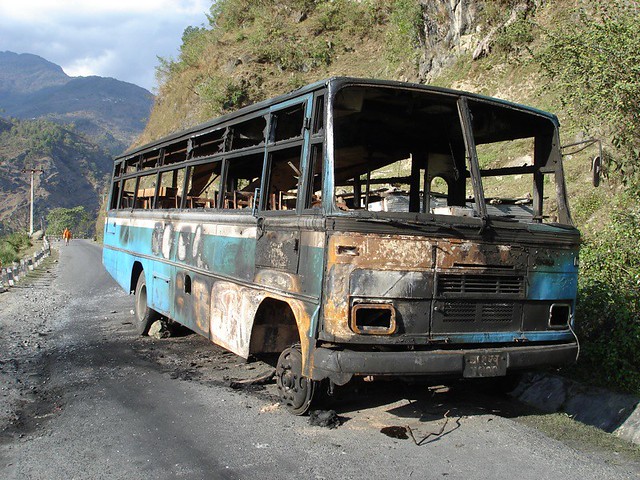 The strikes and blockades going on at the moment in Dhaka have been, to say the least, disruptive to people's lives, and they show no sign of slowing. The economic cost has been huge, the social cost too, and all of this is indicative of the political chaos in the country leading up to elections, due to take place on January 5th, 2014.

But there's a key part of the debate that's missing; the human cost, and the reasons behind it. As friends in Dhaka confirm, these strikes have been the bloodiest and most violent ones yet, with people being killed or seriously injured almost as a matter of course.

This in itself should be enough to stop them being referred to as hartals, which began life as part of Gandhi's civil disobedience movement against colonialism. Employing the word hartal for today's situation seems nothing short of disrespectful to Gandhi, whose form of non-violent protest changed society. And can anything be civil disobedience when it is organised by the authorities, with only the citizens suffering the consequences?

I would be curious to know what people think they are striking against, when they go out onto the streets of Dhaka later today; because to me, it feels like nobody knows, we're just sitting out a high-level political game.

But what actually is the aim of the game? There's no real social protest movement behind them; strikes are simply called by political parties, seemingly randomly. The only consequence, right now, is disruption to every day life, but only for the people who live an every day life. For those calling the strikes, I'd imagine their days continue much as normal.

Of course, all intentional killing is senseless. But this seems a step up (or down?) from that; the people who are dying in these strikes aren't people who chose to give their lives for a cause, because there isn't a cause. They are people who decided to go to work that day, maybe because they wouldn't be able to eat if they missed out on yet another day's income; people who decided to take that bus ride to visit their family, to get out to their village for the weekend, or simply people who wanted to move around the city in their car.

And they aren't just 'being killed'; people are actively killing them- so let's stop using the passive to express actions as terrible as these.

The 14-year-old who “died of serious burns” didn't somehow self-combust, he had a petrol bomb thrown on the van he was in. 8 year old Sumi who died in a bus didn't just die – people set the bus she was in on fire, while she was in it. The 8 people who died in Matuail last Tuesday wouldn't have suffered and died from burn injuries if others hadn't thrown petrol on the bus they were in first, then set it alight; and sadly, there are many more stories like this.

It's this, more than anything, that I can't understand. Whatever the political games going on, it takes real people to carry out these despicable and senseless acts of violence. Perhaps they're being paid to take part in the strikes; but even so, I can't believe that they would get paid extra to kill innocent bystanders.

Where did our sense of morality, in the most basic of senses, go? Especially in a country that has suffered, dare I say it, more than most at the hands of others; when did we turn upon ourselves?

This isn't about tribal loyalties, or religious beliefs, or even political beliefs; those dying in the violence here most likely haven't expressed loyalty to any political party, they just happen to be outside on the wrong day. They didn't leave the house with the resolution that they would fight for their beliefs and maybe even die for them; how could they? There's no moral fight being fought here.

In other protests that I've seen or followed where there is an element of danger, there is always a point of decision for the person taking part. The point of no return, where you know that if you go outside and take part in what you're doing, there's a chance you might not come back; but you choose to go because you believe in what you're doing, and you believe it might change the world.

But this? What is this? The people who are dying here weren't allowed even that terrible choice. The people who are murdering others aren't killing for a reason, however twisted that reason may be; they're just killing, in the most banal of senses. In past years, people would be allowed to leave the buses, or the cars, or the rickshaws, before they were set alight; now it seems, they aren't even permitted that.

While we might complain about the strikes and the inconvenience they cause, and analysts might look at the economic losses the country is facing, just remember that the worst consequence of all of this is caused by us, not by squabbling politicians.

We, Bangladeshi people, are the ones who are killing our fellow citizens; without rhyme nor reason, with no gains, only losses.

If you're playing an active role in strikes to gain a bit of money in a time of need (ironic, then, that if the hartals weren't taking place, you would be able to go back to your normal job) – even if you're just taking part in the strikes for want of something to do – whatever your reasoning, just stop, and think about what you're doing, or about to do.

In other words; we need to find that morality, and fast.

[1] For more reading on hartals, check out this report by UNDP Bangladesh from 2005, “Beyond Hartals”; - sadly, many of the points are still extremely pertinent.